The Racialisation of Campus Relations 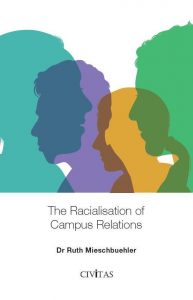 The author of this report, Ruth Mieschbuehler, argues that there is a real danger that campus relations at universities will become racialised. The term ‘racialisation’ – referring to the process of emphasising racial and ethnic grouping – is discussed to show how higher education policies and practices implemented to address the ‘ethnic’ attainment gap are driving this trend. The result of these interventions is that students are ‘minoritised’. In short, they are held to be in need of special treatment.

The ‘minoritisation’ of students has driven racialisation on campuses because the higher education sector is trying to understand and address disparities through ethnic grouping. Racialisation, in turn, minoritises students because it denies students their individuality by emphasising their group identities.

By reflecting on the so-called ‘ethnic’ attainment gap in higher education, the report finds that what appears to be a significant gap when attainment is reported by ethnicity has been shown to be significantly reduced when other factors known to impact on attainment are taken into account. There is no statistical evidence that ‘ethnicity’ determines educational attainment of higher education students.

Yet, as the author argues, policymakers and practitioners believe in the ethnic attainment gap and introduce measures to address it with adverse consequences. Students from minority ethnic backgrounds are believed to underperform academically when they do not. This stigmatises students based on their ethnicity and contributes to the racialisation of campus relations.

The practice of defining and grouping students by their skin colour and basing attainment policies and practices on these divisions drives a wedge between people and removes any sense of our common humanity. Meanwhile, the continued rise of a new type of ‘deficit talk’ depicts students as being vulnerable – and ultimately, it denies students the opportunity to develop fully academically while accommodating them to failure.

Ruth Mieschbuehler suggests a long-overdue change in approach. Universities need to re-examine the reporting of statistical data on attainment that has contributed unjustly to the perpetuation of the diminished educational status of students from minority ethnic backgrounds. The report concludes by rejecting the practice of grouping higher education students by their skin colour and ethnicity in future policies and practices.