Reviewer for the Educationalfutures Journal, British Education Studies Association since 2017

Judge for the BETT Awards, British Educational Suppliers Association since 2017 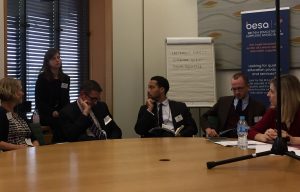 Reviewer of book proposals for Sage Publishing, Education since 2018

External examiner for the revalidation of the BA (Hons) Education Studies Programme at Roehampton University in 2017.

External examiner for the revalidation of the BA (Hons) Education and Professional Practice programme at Havering College, an Open University accredited programme, in 2017.

Session Producers for the Battle of Ideas, Academy of Ideas

Joint Organiser of the East Midlands Salon, a forum for discussion and debate

Mieschbuehler, R. (2016) You’re hired! Who Wants to be an Apprentice? Battle of Ideas, Academy of Ideas, London: Barbican Centre, 22 and 23 October.